JPEG BOLTON, for 'Knowledge is Power: The Production of the City' at Tate Exchange, Tate Liverpool, January 2020. 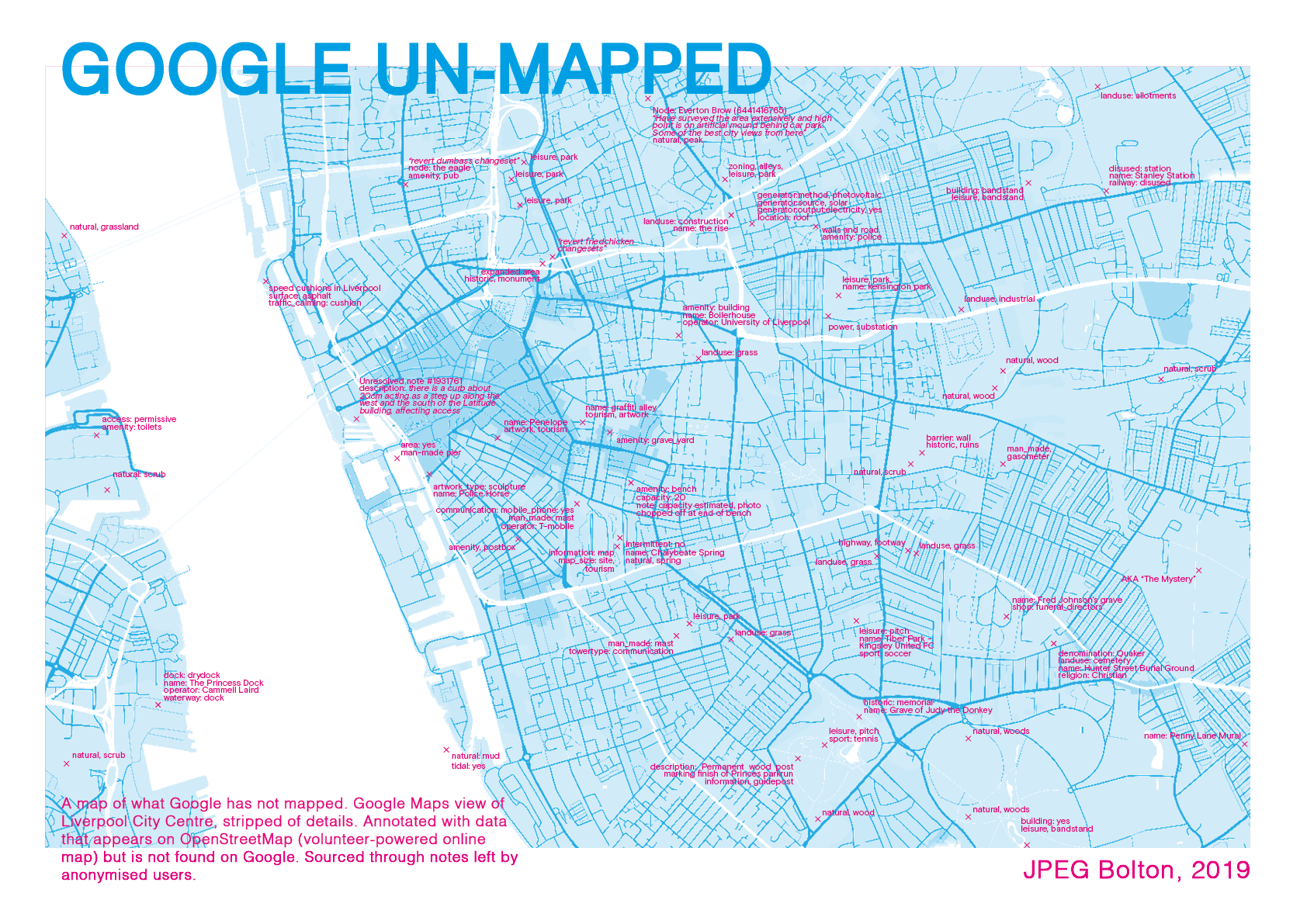 Map/essay, exhibited at Tate Exchange, Tate Liverpool, with a free-to-take-away A3 version.

A map of what Google has not mapped. Google Maps view of Liverpool City Centre, stripped of details. Annotated with data that appears on OpenStreetMap (volunteer-powered online map) but is not found on Google. Sourced through notes left by anonymised users.

I’ve spent the day crawling through online maps of Liverpool city centre, flicking between tabs, zooming in and out and in again. What I’m looking for is, basically, boring: power, substation. amenity: police. name: Chalybeate Spring, natural, spring. These are notes and tags left by users on OpenStreetMap, an open source platform for meticulously documenting and annotating the planet, driven by volunteers.

The other tab that’s open is that other mapping platform: Google Maps. What I’m looking for is items that appear on OpenStreetMap but not Google, sifting through the two datasets of Liverpool to find things that Google considered too redundant, free or dangerous to include in their version of the city. When I find one, I mark its location on a map of the city stitched together through screenshots lifted from Google Maps. It’s becoming a map of the marginal : historic: ruins, natural: woods, amenity: toilets (access: permissive).

Whilst doing this, I’m thinking a lot about what Google Maps does to our understanding of our cities, how it affects the way we navigate, notice and consider what is possible within them.

Built on military technology, Google’s platform is way more than a map, a tool for navigation. Unlike its paper elders, Google Maps casts you, you, as the pulsating blue centre of a selective rendering of the world that is extensively reviewed, catalogued and smoothed out by developers. It doesn’t present itself as just a way to get around a city, but as the city’s index and discovery platform. The map is truly now the territory.

By this, I mean this: you’re in a city and you search for, I don’t know, ‘sandwich’. Sandwich places come up and you probably pick one with good reviews and head towards it: in that moment, the city no longer becomes its own basis for discovery, but becomes instead an obstacle, something you have to get past to get to that mega *4.6* sandwich. As you do this, you might walk past a load more sandwich shops with equally mega sandwiches, but they may as well not exist. You don’t see them, they’re not ranked high enough in the database, they’re just listless buildings in the way.

Google’s initial service, its flagship google-dot-com browser ‘Search’, has become the de facto atlas of the internet: the place from which we depart. What it does is reduce a much bigger space to a dataset of ranked search results, narrowing down our options into manageable results. But anything that’s not on the first few pages of a search may as well not exist, a fact given credence by the multibillion industry of SEO (search engine optimisation, rewriting websites for algorithms so as to appear higher on search results). What is also overlooked is the extent to which Google favours websites and services that are ‘downstream’ in its data-gathering operations. The version of the internet the company presents is the one that ushers people deeper into its data-gathering operations.

Google Maps puts our cities through the same process. The places it takes us to are generally those in which we spend money, expose data, and are watched. As Shoshana Zuboff puts it, the evolution of Maps is one that follows Google’s wider trend, “the migration from an online data service to a real-world monitor to an advisor to an active Sheperd — from knowledge to influence to control”.

One thing I’m thinking about as i’m making the map is how ‘Developer’ as a standalone job title defaults to either web- or property-, and how the two roles of web developer and property developer share a common ground: the remodelling of environments towards financialisation. One does it online, the other does it offline (although both work extensively together). This process of financialisation is becoming apparent, as I mark a blank spot on Google’s map with the location of some free tennis courts (all paid tennis courts are, of course, listed). The same goes for small parks and woods and liminal areas of green, which are consistently presented on Google Maps as blank patches of grey, ‘nothing to see here’. This is especially true of lower socio-economic areas on the outskirts of the city centre such as Lodge Lane and Kensington. It’s as if these places are being tarmacked over, kept grey.

Another thing is how totally featureless the retail-driven quarter of the city appears on my map. It’s a testament to how overplanned the area is that not one OSM user has any idiosyncrasies or points of interest to add to it, nothing to say at all. It’s also, perhaps, testament to the extent to which the district (Liverpool ONE, a carefully planned shopping district built 12 years ago, all light grey concrete and glass) is itself an offline rendering of online shopping — smooth, calm, internet become outernet. It’s cartograph by Google is complete, because the area never had anything to put up a fight with.

The only other spot that is so conspicuously blank is the portion of the city taken up by the University of Liverpool. Just like Liverpool One, it is a part of the city that is planned to death, an architect’s impression become jarringly accurate: renderspace. Unlike Liverpool ONE though, it doesn’t have extensive street view coverage, because of gates blocking traffic into the district. It seems in cities that privacy is a luxury afforded only to fortresses.

Unsurprisingly, Google’s version of the city is implicitly driven by ownership: the listing of ‘Zap Graffiti’ on Google Maps is ‘Graffiti Alley’ on OSM. Google’s listing upsells tickets for a 2-hour graffiti workshop (£25) from directly within the app. OSM’s lists it simply as ‘name: graffiti alley’, tagged with ‘tourism’ and ‘artwork’. The same goes for the largest open green field in the city, at the North of Sefton Park. Three festivals are listed (all of which are temporary, one-weekend affairs, two of which put the park behind a paywall). OSM on the other hand, carefully plots out the boundaries of the woods on the field’s edges, woods that Google doesn’t bother to distinguish from the grassland around it: all that is vegetative melts into green.

Maps are, essentially, weapons. By this I mean that maps have always been soaked in political and private agendas, in order to control the visibility of and access to an area. “Maps created empires”, noted historian John H. Harley; one thing I’m learning, as I annotate a blank grey swathe of the city with landuse: allotments, is the kind of empire Google is seeking to build.